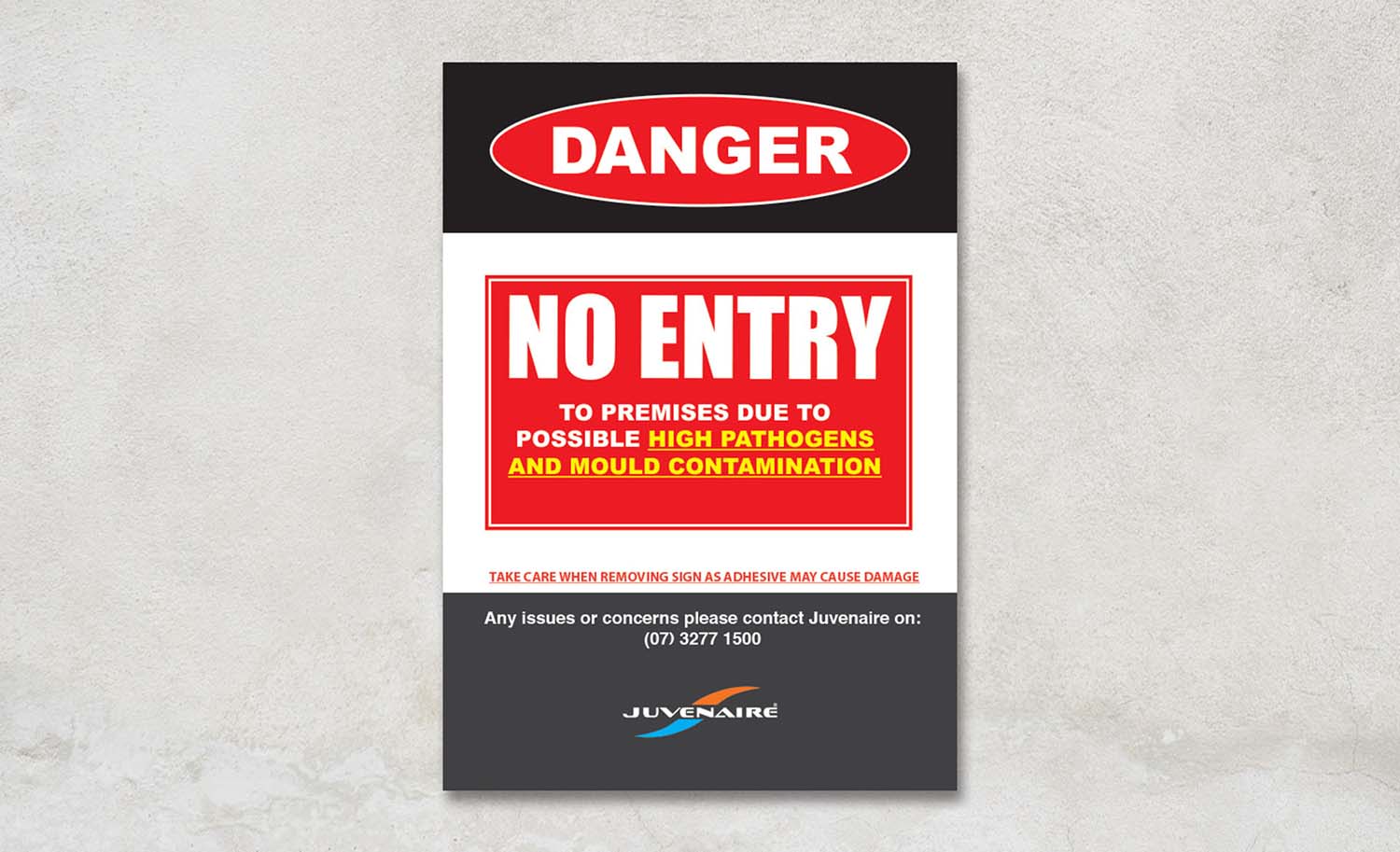 Juvenaire has been in the restoration business for over 25 years and has successfully completed countless mould decontamination projects throughout Queensland. However, new challenges continue to emerge more often than not. This particular project is not an exception, with three storeys of mould contamination presenting its fair share of challenges.

Water damage is a very common occurrence in households; from plumbing issues, water leaks, appliance breakdowns and water overflows, roofing collapse and flooding; all of which often causes extensive damage and subsequent mould growth. Mould growth can also be hidden behind building materials and walls and thus is not always easily observable. Therefore, it is extremely important to have water damaged areas in a home dried professionally or else mould growth may become an issue.

Given the right conditions, mould spreads at an extremely rapid rate by releasing airborne spores in large amounts. If inhaled, mould spores can cause extreme respiratory issues and with continued exposure, can cause major health issues. Often recommended is a vinegar solution to clean the mould and although it may destroy the fruiting body of the mould, it will not remove the Mycelium (made up of Hyphae (branching filaments)) ‘from its roots’ nor does it remove the staining that the mould leaves behind. This is why professional remediation combined with specialist cleaning agents becomes extremely vital.

Professional restorers and technicians have the knowledge and training to deal with mould even in the most challenging circumstances. One such example is the aforementioned Gold Coast property that was recently restored by Juvenaire. We will take a thorough look at the process undertaken by our expert technicians further into this story.

‘Glittering water views from every window’ is how one would normally describe this three storey multi-million dollar vacation home on the Gold Coast. On this instance however, it could only be described as an uninhabitable mould infested three storey property.

The property was vacant for three months before the mould infestation was discovered. The owners of the property are expatriates and oftentimes the house is left vacant for extended periods. During its most recent period of vacancy, a major water leak made its way from the terrace of the home (on the top most floor) right down to the ground floor. This water damage was left undiscovered during this time and eventually, mould took over all three storeys of the house.

Juvenaire’s Senior Project Manager, Dave, was in charge of the remediation on this property. His expert knowledge and 15 years of industry experience saw the project to successful completion. On the initial visit, Dave scoped the entire house for visible signs of mould growth and water damage. An assessor’s initial visit and report helped guide him to the potential source of the water leak and the obvious areas that were initially identified for remediation. 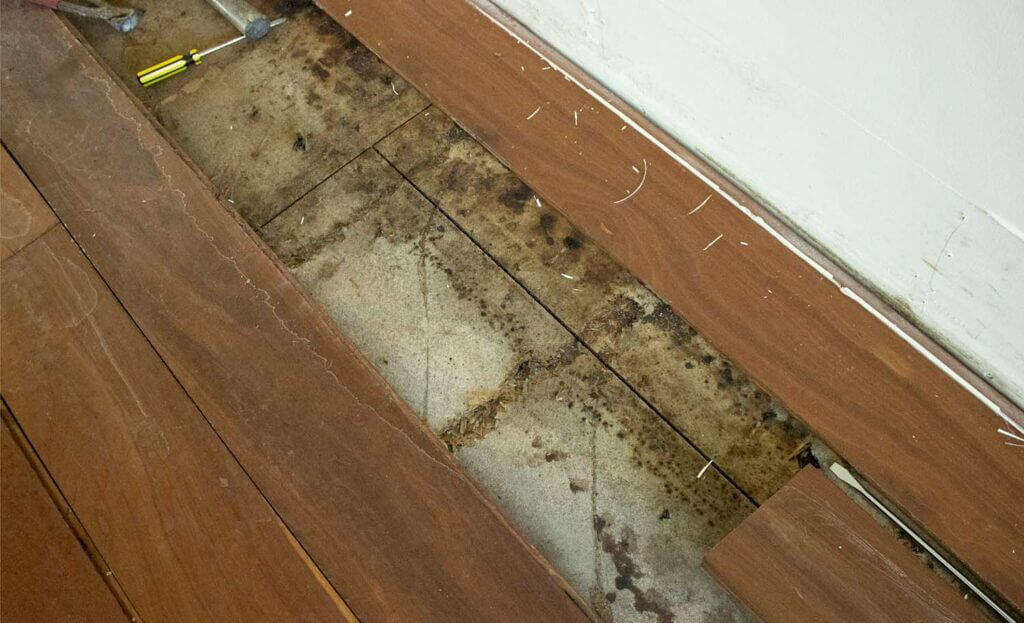 The pathway of the water leak was identified and found to be mould infested. Cracks in building materials (due to absorption of water) was present on each level in the same vertical location. Nearby bedrooms were also contaminated due to spores travelling throughout the house and germinating on non water damaged regions. This was due to the high humidity environment inside the premises while being locked up. Some of the household contents such as the sofa shown below was so heavily contaminated that it became unsafe for human use and was therefore marked for safe disposal. 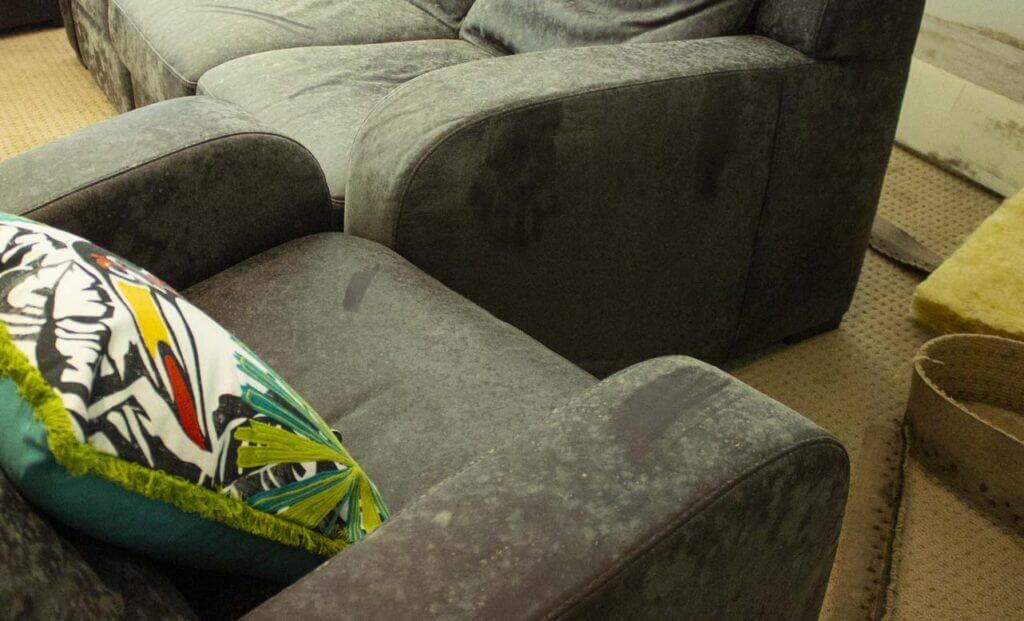 Our senior restoration technician, Maurrie, accompanied by Project Manager, Dave continued to investigate the extent of the mould contamination throughout the property. Visible signs of mould is often indicative of the presence of mould behind walls and ceilings. The second phase of the remediation process is to carry out an invasive investigation that included removing the skirtings on each floor to get a quick indication of the presence of mould in these areas. 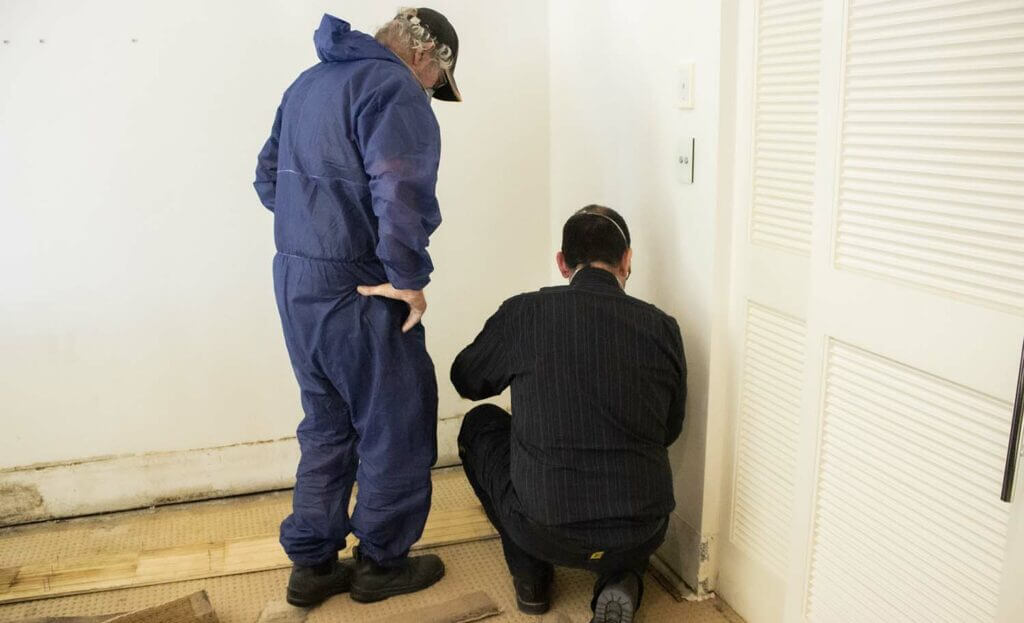 Because mould spores are usually airborne, Juvenaire uses Air Scrubbers throughout the property to collect mould spores from each region of the home. Air Scrubbers are essential equipment used in mould remediation projects as they exponentially reduce the number of spores in the air and greatly improve Indoor Air Quality (IAQ). Air Scrubbers also remove the dust made airborne while removing sections of the walls and skirtings. 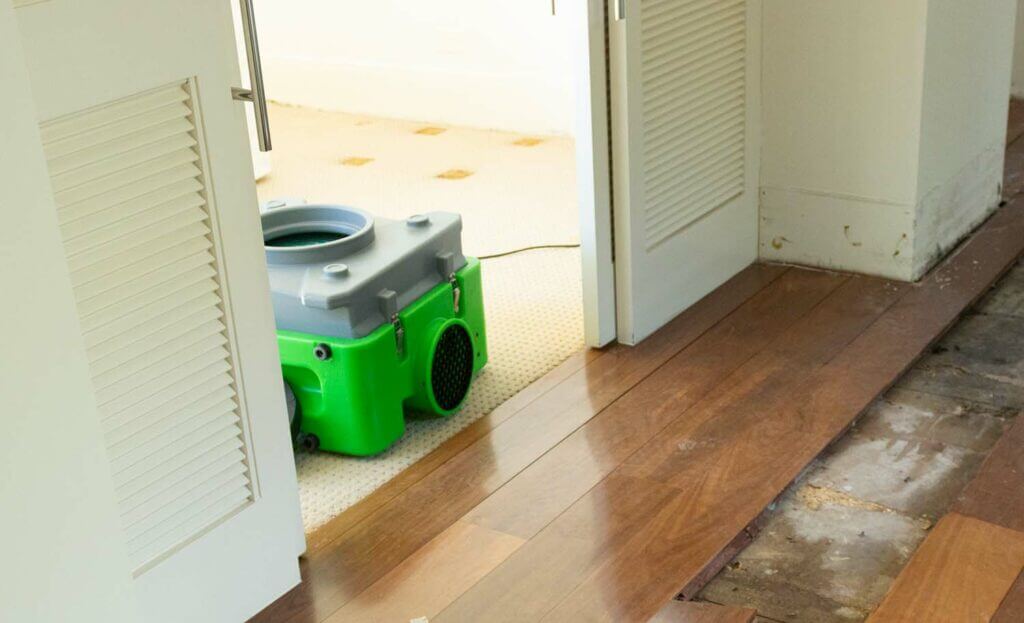 Once all the contaminated sections are identified for remediation, our technicians get to work. Every room is examined and all contents are cleaned, restored and the rooms are isolated to prevent cross contamination. Carpets and contents that could not be restored were removed and discarded safely while those that were restorable were wiped down with specialist mould cleaning agents.

The major remediation work begins with sections of the walls and ceilings with mould growth being stripped off and disposed once all demolition works have been carried out by Juvenaire. Juvenaire uses specialist mould cleaning agents to eradicate the mould and tough stains that it usually leaves behind in these hidden regions.

This stage is often the most important as it ensures that a thorough remediation has been completed. Once these areas have been cleaned thoroughly, Air Movers and Dehumidifiers were engaged (specialist drying equipment). This helps to dry water damaged materials and the Air Scrubbers continue to remove airborne particulates and other contaminants in the home environment.

Once the remediation and drying had been completed, all remaining building materials that had been affected were treated. Dave then inspects the site to ensure that a high quality completion of the project has been achieved. He also uses specialist equipment to test the Indoor Air Quality and surface samples were sent off to an independent lab for testing the quantity of mould spores remaining in the home.

The reading had fallen within a normal mould ecology and a completion certificate was subsequently issued. The restoration project was deemed successful and transferred on to building contractors for the reconstruction of stripped out areas.

Had any issues with mould lately? Check your insurance policy to see if you’re covered.